Petal-area residents can look forward to a full day’s worth of holiday activities with the upcoming 2021 Petal Home for the Holidays event, which will showcase a parade, vendors, a Christmas tree lighting and more. Festivities, which are put on by the Petal Area Chamber of Commerce, beginning with a Christmas Market at 3 p.m. Dec. 4 at Hinton Park, behind Petal Civic Center on South Main Street.

“First of all, it’s a community tradition – we know that this is the type of event that makes our community happy to be where they are,” said Valerie Wilson, executive director of the Petal Area Chamber of Commerce. “We’re very proud of the fact that we can put on events like this in our community, and to keep the spirit of Christmas here in Petal.
“I think (residents) absolutely did a wonderful job shopping in Petal for Shop Petal First. This year, because of COVID, we appreciate being able to get together and have our events right here to enjoy being part of our community.”

The Christmas Market, which will last until 7 p.m., will feature several vendors selling items such as arts and crafts, food and holiday-themed gifts.
The parade will start at 4 p.m. and will follow its usual route from Dirt Cheap on North Main Street to Hinton Park, where Santa Claus will be available for photographs. Awards will be given out, and Mayor Tony Ducker will be on hand to greet parade-goers.

The parade will open up with the parade banner, which will be carried by representatives from the Petal Fire Department and Petal Police Department. So far, approximately 50 float entries have signed up to take part in the parade.“We’ve got everything from golf carts to dirt bikes to large floats, to the Petal High School band,” Wilson said. “We’ll have lots of pageant award winners, and everybody will be represented. “And this year, we have somewhat of a special surprise: for the first time in many, many years, Santa will not be on top of the fire truck. We wanted people, especially the children, to be able to see him better, so he will be at the end of the parade.”

The Grand Marshal for this year’s parade is Max Fullen, the 13-year-old son of Randy Fullen and Elizabeth Dodge who was recently diagnosed with brain cancer. Fullen suffered a stroke while in school and had a lengthy stay at Blair E. Batson Children’s Hospital in Jackson. Fullen has gone through several rounds of radiation and chemotherapy since being diagnosed.
“We actually put it out on Facebook, and we had a ton of people that were very good nominees,” Wilson said. “But Max was overwhelming – we had so many people saying that Max would be a great grand marshal, mostly because of the courage he has shown, and the strength he has shown.

“He represents the very best of people, and at this time of the year, that’s what you want your grand marshal to be – somebody that represents the best of us, and that was Max. So we’re thrilled to have him as our grand marshal, and we look forward to giving him a wonderful evening leading the parade.”
Judges for the parade will be Jim Cameron, Caroline Nurkin and Jake Wilson. The event will be followed by the Celebration in the Park and the Festival of Trees, which will feature a tree-lighting ceremony in honor of Christmas.

“The Festival of Trees is various trees that have been put up by businesses and individuals and clubs in Petal,” Wilson said. “They will all be lit at the same time right after the parade. The Petal Arts Council is in charge of the Festival of Trees. “Also during that time, we’ll have live music; the Petal Jazz Band will be playing. Much love will flow through the community.”
Petal’s Christmas festivities date back to at least 1962, when the Petal Merchant’s Association put on the city’s Christmas parade. In 1974 – the year the City of Petal was incorporated – city officials took over handling the parade.

“This has been an event that even the older people in our community – the seniors – remember,” Wilson said. “We want to re-create those same memories for the children in our area now.”
In addition to the chamber activities, Petal High School Indoor Percussion is presenting Breakfast with Santa from 8:30-10:30 a.m. at the Petal Primary School cafeteria. Tickets are $7 each and are available for purchase at the door, or from any Indoor Percussion student. Participants are encouraged to bring their own cameras for pictures with Santa Claus.
Also, the Cosmopolitan Club of Petal will host “Let’s Jingle & Flamingle” tasting take-out from 11 a.m.-12:30 p.m. Dec. 4 in front of Petal Middle School on East Central Avenue. 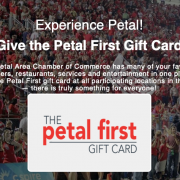 A few months ago, Valerie Wilson, who serves as executive director of the Petal Area Chamber of Commerce, and an acquaintance were discussing the idea of instituting a community gift card that would keep shopping dollars in the Friendly City. From that came the Petal First Gift Card, which can be loaded with any amount of money and used exclusively at 18 businesses across Petal. The card, which is provided by Yiftee, became available in Petal on Nov. 1.

“With a little bit of research, we found out that this is not a new idea; there are many communities around the country that do this, and organizations that provide this for chambers of commerce in different cities,” Wilson said. “So I’m just waiting to see how it works out, and see if people like it.
“Hopefully, we’ll have more and more merchants join us, so that whoever buys a gift card, they have many more options available.”
To purchase a card, individuals can visit www.petalchamber.com, click on the “Live Here” link and then click on the “Petal First Gift Card” link. There, purchasers can choose the recipient of the card and whether to send it via email or text message.
The purchaser pays a small eDelivery fee to cover processing costs. The card is available electronically, or purchasers can choose to print it on a piece of paper. The card is keyed manually into a business’s Point of Sale system.
“It’s a digital card, so it’s not like a traditional card where it’s made of plastic,” Wilson said. “You can send it to the recipient, or you can buy it for yourself.
“You can buy additional cards – it’s not like reloading that same card, but you can purchase as many gift cards as you want.”
Refunds can be applied to the Petal First Gift Card. In the event that the purchase exceeds the balance on the card, another form of payment will be needed to cover the balance.
So far, the Petal businesses that are participating in the Petal First Gift Card are, in alphabetical order:
• A-1 Graphics & Promotions, 233 Main Street
• Carter’s Jewelry, 1140 Evelyn Gandy Parkway
• Fig Boutique, 1272 Evelyn Gandy Parkway
• Grand Central Outfitters, 128 South Main Street
• Los Chicos Tequila Bar & Grill, 1080 Evelyn Gandy Parkway
• McAlister’s Deli, 1140 Evelyn Gandy Parkway
• Merle Norman & More, 100 Eastbrook Drive, Suite 90
• Moreno Eye Care, 598 East Central Avenue
• Patriot Spirits, 35 Byrd Boulevard, Suite 101
• Petal Tire and Service, 909 Mississippi 42
• Planet Nutrition, 922 Mississippi 42
• Rhinestone Ranch, 100 Eastbrook Drive
• Southern Lace Boutique, 100 Eastbrook Drive
• Summit Wine and Liquor, 1272 Evelyn Gandy Parkway, Suite 70
• Sweet Blossom, 1140 Evelyn Gandy Parkway
• The Ssipp Café, 128 North Main Street
• The Wine Cellar, 102 Carterville Road
• Tropical Glamour, 424 East Central Avenue
“(The businesses) are all for it,” Wilson said. “Even people that don’t have a participating business are excited that they can purchase a gift, knowing that it’s going to stay here in Petal, and that whoever they give it to is going to have a large selection of places to go to.
“It’s not like they’re not going to be able to find a place to use it. But we know we’re going to keep those dollars local.”

JOIN US
Scroll to top