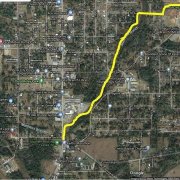 Valerie Wilson, executive director for the Petal Area Chamber of Commerce – along with other city officials – is looking forward to a project more than 10 years in the making that will see a pedestrian/bicycle path stretch along Matthews Branch in the Friendly City.
The path, which is made possible with an $862,560 grant from the Mississippi Department of Transportation last year, will run along the branch from the area of Southern Bowling Lanes on South Main Street past Petal City Park, near the Petal Family Branch YMCA.
“It’s going to increase our walkability score; it’s going to be a complete addition to what we already have available,” Wilson said. “It’s going to make downtown so much more available for people to walk from Point A to Point B and that kind of thing.

“It’ll allow people to walk safely in downtown Petal. It’s not a new idea; I’d say it’s been floating around for a minimum of 10 years.”
Walkability scores are typically seen as good if the number is 70 or above, and many real estate search sites, such as Trulia and Zillow, feature walk scores prominently. Petal’s current walkability score is 42. A 90 or above is considered a “walkers paradise” where no car is needed, and most daily errands or activities can be accomplished on foot.
If all goes according to plan, work on the new route will begin in approximately a year.
“The way I understand it, it will almost connect with Central Avenue,” Wilson said. “So it will be an excellent way for kids to get to the YMCA, to get to the upper elementary, to get to the ball fields, and to not be on the street.
“I think it’s going to be extremely well-used; it’s a beautiful walkway. But it’s not just a nature trail; it makes accessibility to different places available to anyone that lives in downtown Petal. I feel certain that different groups are going to want to add maybe benches to sit – even some public artwork along the way.”
The path was approved at a recent meeting of the Petal Board of Aldermen. The upcoming route will take the place of a previously-approved sidewalk that would have run from West 10th Avenue and South Main Street down Morris Avenue near Petal Middle School.
That idea was taken off the drawing board based on information provided by city engineer John Weeks, which saw the project had a high potential of cost overruns and deadline issues.
“One of the things … that I didn’t like (about the original plan) was that it wasn’t going to be business-friendly,” Mayor Tony Ducker said. “It would have possibly put at least one business out of business, and shut businesses down during the construction phase.
“When you get around Ace (Hardware), up in that area, those folks don’t have a lot of land to give; a couple of them actually use that for parking. (Also), we already have some sidewalks on the other side – that we need to do some work on, admittedly – but this actually opens up an entire different part of town.”
Ducker said the Matthews Branch route will give officials fewer issues with land and property owners, as there is no land in that area that is buildable.
“We’re not going in and taking land that’s currently being used by anyone,” he said. “We actually run our sewer down Matthews Branch as it is, and we maintain that area by cutting the grass so we can have access to our sewer infrastructure through there.”

Tony Petro can lay claim to being one of the longest-serving car dealers in the Hattiesburg area, having opened Petro Nissan on September 14, 1990 on North Main Street in downtown Hattiesburg, at the current site of Grover Brothers Restaurant Supply.
A year later, Petro purchased the former Oldsmobile dealership before acquiring the Lincoln-Mercury dealership on West Pine Street. A few years ago, Petro Nissan moved to its new location at 6248 U.S. 98 in Hattiesburg, in the Oak Grove area.
And although Petro has been a Hattiesburg mainstay for more than two decades, he is also one of the biggest contributors to the Petal Area Chamber of Commerce, showcasing why anyone – even outside the Petal city limits – can benefit from being a member of the chamber. Petro recently took the time for a phone interview to discuss his business and the perks of being a chamber member.

Petal Area Chamber of Commerce: Being a Hattiesburg-based business, what is your connection to Petal?
Tony Petro: One of our best markets, as far as market penetrations, is actually in Petal. My brother grew up in Petal and I grew up in Petal – my dad was a Hattiesburg boy, but (he and my mother got married) and we lived in Petal forever. It’s a funny story; I was in the ninth grade and my mom said she would never leave Petal. My dad was working in the car business at Dossett Pontiac at the time working six days a week, long hours, and he came home one day and said “pack your bags, because we’re moving. I get stuck by that train (in Hattiesburg) every day, and I’m tired of waiting on it.” Had the Evelyn Gandy (Parkway) been there at the time, we’d still be living in Petal.

Q: Speaking of the Evelyn Gandy Parkway, which was officially opened in 2006, that thoroughfare has contributed to some significant growth in The Friendly City.
A: I have family in Petal, and Petal – really in the last 10 years, since the Evelyn Gandy was built – has really experienced an explosion of growth. It’s got the Number One school system (the Petal School District) in the state, year in and year out. They do a great job, and that’s why we joined the Petal Area Chamber of Commerce, probably eight or 10 years ago.

Q: Have you thought about bringing a dealership to Petal?
A: I was hoping to be able to (do that) on the Evelyn Gandy, and the one I was looking for, somebody else bought it. But that’s why we joined the chamber, and (executive director) Valerie (Wilson) does a great job with the chamber over there, and Petal does a great job. There’s a lot of commerce, but the one thing they don’t have is a dealership. Car dealerships are high-ticket items – they’re high transactions – so car dealerships generate a tremendous amount of tax revenue for the local tax base. The one thing that (Petal) doesn’t have is a local franchise, new car dealer over there. We might be able to seek one over there one day, but by that time I’ll probably be retired anyway.

Q: Even if you don’t bring a Nissan dealership to Petal, have you thought about other options in that avenue?
A: I don’t want to call any names, but I had spoken to a couple of new car manufacturers that are not represented in Hattiesburg. I told them what my plans were, and I actually told Valerie about it, and right now they’re just selling all the cars they can make. So yeah, if I could do it right now, absolutely. But the (current) Nissan store is going to stay where it’s at; it’s got way too much reputation and staying power on Highway 98, because we were the first new car dealership out there. Now, pretty much all of them are moving out there.

Q: What benefits have you seen from being a member of the Petal Area Chamber of Commerce?
A: We do it to support the city, to support the commerce and business for Petal. We sell a lot of cars, percentage-wise, than we do just about anywhere else. We always advertise during the Petal football games; in fact, I’m the one who came up with it. I heard they had a Jumbotron there, and I called the school and said … I’d be interested (in advertising). So I’ve been putting ads before the game, during the game, at halftime, at the third and fourth quarter. So it’s a lot of money for the school and the football program. We joined the chamber just to be good neighbors – we do a lot of business in Petal, and we really didn’t have an investment over there. But Petal is really coming into its own, as far as business and opportunity, housing, schools. They’ve just done a great job over there, and we wanted to support them in any way we could.

JOIN US
Scroll to top